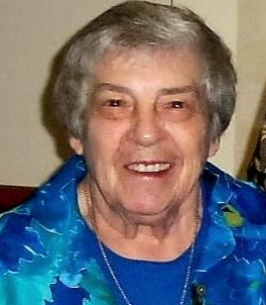 Ruth Butler Alspaugh, affectionately called ‘Granny’, passed from this life into her heavenly home at the age of 95 on January 13, 2022. She is preceded in death by her husband of 70 years, George W. Alspaugh (1925-2020), her parents C.E. and Mattie Butler and sister Ruby.

She is survived by her two daughters: Betsy Alspaugh (Alex Kapela) of Hawaii and Andrea “Andy” (David) Billings of Berea, three grandchildren: Hannah (Mitchell) King of Berea, Sarah (Chris) Hogg of Lexington, and Brent Billings of Berea. She loved watching her four great-grandchildren Savannah & Haley King, and Sadie & Bennett Hogg grow. She also has several nieces and nephews spread out over the globe.

She grew up in the south Arkansas oilfields. After graduating high school, she went to California with her sister Ruby and worked in a couple shipyards then a dry cleaner's. She returned home to go to Warner Brown Nursing School in El Dorado, AR. The day after she graduated from nursing school, she and George married and began their life together. Ruth and George opened Alspaugh Jewelry in Stephens, AR where Ruth assisted in running the store. While their children were young, they sold the jewelry store and George began working for Texas Eastern Transmission Corp. Once their girls started school, Ruth was always active in PTA’s in whatever state they happened to live. She was always known for the large cinnamon roll she created and brought to all the Methodist Church potlucks. She treasured the friendships she made moving to different states with George’s job. They retired in Columbia, TN and in 2004 they moved back to Kentucky to be near their daughter and her family. For many years they enjoyed annual trips to Hawaii as well as to Arkansas for family reunions. Ruth kept busy sewing or doing embroidery and helping George with the family genealogy.

The body will be cremated and a virtual memorial for both Ruth and George Alspaugh will be available after January 22 for public viewing, to obtain the link to the recorded service send an email to alspaughservice@gmail.com and the link will be emailed back to you. In lieu of flowers, donations can be made to: Berea United Methodist Church Reach Fund (101 Fee St. Berea, KY 40403), or Aldersgate Camp and Retreat Center (125 Aldersgate Camp Road Ravenna, KY 40472), or Hospice Care Plus (208 Kidd Dr. Berea, KY 40403) or Alzheimer’s Research.

All rights reserved. This obituary is also archived at obittree.com